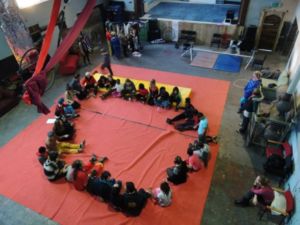 Project of The Invisible Circus involves children and teenagers from Bristol to a circus project. International part lead by Holly Stoppit will happen in October 2013.

Holly Stoppit is a theatre director, workshop facilitator and Dramatherapist who originally grew up in the circus. Her dad’s circus (Arts Play Umbrella) was built on the principles of social circus and received funding to offer free circus workshops and circus-theatre performances in deprived areas of the UK. Holly’s innate knowledge of the positive impact of the arts upon individuals and communities has threaded through her career as a performer and director. Holly’s performance work combines clown, live music and story telling, she has performed in circus, cabaret, schools, rural touring and Street Theatre.

Through her parallel directing career, Holly has facilitated devised performance on pretty much all scales, from a trilogy of one man semi-improvised autobiographical tragic-comedies (Ed Rapley’s Self Trilogy) to The Invisible Circus’ epic promenade circus-theatre spectacular, Carnyville. Holly has directed circus, circus-theatre, street theatre combined with; live music, dance, circus, clown, walkabout, and story, then there’s theatre-theatre, and site-specific theatre….

All of Holly’s work has in common a desire to make and perform work, which really engages with audiences.

Holly’s deep respect for the transformational potential of creative process is what lead her to studying for an MA in Dramatherapy. Through her study, Holly has worked with many different types of people, from young children with behavioural issues, to elders with dementia, to adults with learning disabilities, to adults with mental health issues to recovering addicts to circus students. Through these placements, Holly discovered wonderful ways of using drama, movement, storytelling, voice-work and clown to offer opportunities for both personal and community development.

What Holly’s Sessions will focus on

Holly’s sessions will focus on circus as a means to connect. She will draw upon her experience to deliver taster sessions for the social circus teachers to explore different ways of connecting, person to person. We will look at group dynamics and ways of creating spaces that are safe enough to take risks, not just in a physical sense, but also through acknowledging and exploring the vulnerability surrounding learning. We will explore the teacher’s interpersonal skills, discovering what behaviour / language / boundaries etc help people to thrive.