The Hungarian Juggling Association is the platform in Hungary of independent circus artists. It
gives an official background to all initiatives about juggling as a circus art, sport or hobby/ free time
activity. In its projects, the members of the association use the creativity, joyfulness, and challenge
of juggling combined with a strong educational approach, in this way completing cultural, educative
and civil missions. The Hungarian Juggling Association evolves its activity both at national and
international level. The four national missions are to 1) support members for networking, 2)
disseminate news to the community via media, 3) run the Inspirál circus space and 4) organize and
coordinate international projects and meetings.

Participant
The participant of the Joint Staff Training was Florian Bögner, the coordinator of the CIRCE project 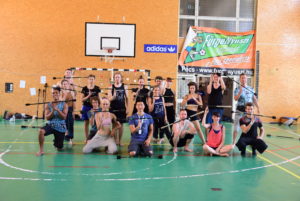 During the Joint Staff Training Florian Bögner supported the organisation of the convention- before,
during and after. Additionally he was the stage hand for the premiere of Linda Farkas Fire costume show, participating in the rehearsals beforehand and was also stage hand for the fire group
“Pyrodanza”at the gala show at the Juggling Convention. Furthermore he observed some training of
the summer camp, mainly the parkour lessons.

Learning from each other’s organisation

The INspiraĺ circus space has three different rooms which are used by different groups. As it
happened during the summer camp, artists, youth and juveniles where there at the same time. This
enabled exchanges, and for the younger people to see what they can actually achieve with circus
training. Often they are allowed to watch rehearsals. This interaction of youth and performers
happens at CABUWAZI mainly through the trainers, which are sometimes former performers.
Furthermore, it was interesting to get to know the organisation of a juggling convention from the
inside. As CABUWAZI is working with youth we do not have adult formats.
On a personal note to be the stage hand of the fire costumes show was a new experience for me, as
this is rarely seen in German fire communities. And to experience different ways of preparing a fire
show, for example the dipping was done without shake off and different liquids were used to light
the props.

About the Author: marianthi